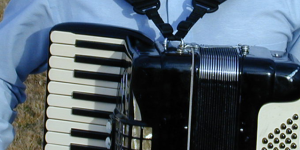 He was the beloved husband of the late Lena A. (Cinquegrana) Mansour.  A lifelong resident of West Warwick, he was a son of the late Joseph and Vittoria (DiCarlo) Mansour.

Alex had two real loves in his life; golf and music-but when asked to choose, he always said the accordion was his first love.

His wife Lena bought him his first set of golf clubs and soon he became a well-known competitor, playing in many state and local tournaments.  He won the RI Four Ball with Pat DiPadua in the 1960’s.  He was a member of Valley Country Club in Warwick, RI since 1949 where he won the club championship and broke the course record which still stands.  In 1999, he became an honorary member.  His travels led him to play many famous golf courses such as Spy Glass, Spanish Bay, The Doral and Pebble Beach, which was his favorite.

He also spent time as a golf instructor at West Warwick Country Club working with many youngsters and adults.  He loved spending time on the practice field with his nephews and friends, hitting balls and giving them helpful advice.

Alex studied the accordion for eleven years locally as a young boy and began playing professionally at the age of fifteen.  He continued his education in New York City, travelling back and forth every other week.  He was a member of the Providence Federation of Musicians for seventy years, serving on the executive board for thirty-five years.  Alex taught the accordion at DiPippo’s Music Studio on Federal Hill during the 50’s and 60’s and many of his students went on to play professionally.  His career took him on an interesting path meeting and entertaining many famous people including President G.W. Bush, the DuPont’s, Connie Francis, and the Kennedy wedding reception in Newport, RI in 1953.

Alex cherished the time he spent with his friends at McDonald’s and the Mall food court where he always made them laugh with his endless jokes.  What gave him the most joy was bringing smiles to the residents of healthcare facilities during the holiday season.  It goes without saying that Alex never worked a day in his life because he did what he loved.

He was a devoted father to his daughters, Janet, Cathy and Elaine and had many special nieces and nephews in his life.  He was the brother of the late Anthony Mansour, Mary Petrarca, Irene Coletta and Carolyn Tedeschi.

Relatives and friends are invited to attend a Mass of Christian Burial on Monday, December 14, 2020 at 10:00 am in St. Joseph Church, 854 Providence Street, West Warwick (all COVID-19 guidelines will be observed).  Due to the pandemic restrictions, visiting hours and interment will be private.  In lieu of flowers, contributions to Volunteer Services for Animals - Warwick Branch, PO Box 6263, Providence, RI 02904 in his memory would be appreciated.  Arrangements with PRATA-GALLOGLY Funeral Home.  Information and condolences please visit: www.PrataGallogly.com

To send flowers to the family or plant a tree in memory of Alexander J. Mansour, please visit our floral store.